Many thanks to our sponsor – Upper Hunter

Or get really dressed up and strut the Red Carpet.

and have had to turn disappointed people away TICKETS ON SALE now! – $20 including a light supper. Drinks Extra (CASH ONLY ABLE TO BE ACCEPTED)

(29th August from Hunt a Book)

*NOTE – a 50 cent per ticket TryBooking.com online booking fee will be added to your credit card

We will vote for  the Annual Scone Short Film Festival “People’s Choice Award”.

Our annual Short Film Festival is a cinema and social experience. The buzz you get at an event like this isn’t something you replicate at home, and we are showing films most people normally wouldn’t get the chance to see.  We also provide a social setting for people to discuss the films so everyone can share in the atmosphere.

There is always a broad cross section of animation, comedy, romance and drama. Each short film tells its own very different story for viewers to appreciate and enjoy.

Don’t forget to dress up for the Red Carpet and photos! You don’t have to get dressed up – smart casual is fine, but wear your finery if you really like.

NOTE – Under 18’s must be accompanied by a parent or adult guardian.

Urzila Carlson stars in a Tropfest finalist film.  She is a multi award winning stand up comedian, who appears regularly at the Melbourne International Comedy Festival and on television in Have You Been Paying Attention and Spicks and Specks
Pinchpot, has been nominated for an AACTA award for Best Short Animation.  “Congratulations to animator Greg Holfeld for his zippy animation, and to Dave McEvoy for his wonderful jazz soundtrack.  We can’t wait to enjoy it on the big screen!”
Your Call Is Important To Us, is a highly relatable and entertaining comedy.  This multi-award winning film stars comedian & musician Andy Lee, best known for his work alongside Hamish Blake in the comedy duo, Hamish & Andy. He also has a highly rated radio show and his latest television project, True Story with Hamish & Andy has a second season.  This short film also stars David James, a prolific television, film and stage actor, best known for the Oscar-nominated film District 9.
We are thrilled to have Cinematographer, Velinda Wardell ACS , as a guest.  Velinda is an award winning Australian Cinematographer and Director of Photography.  Velinda now creates content for big and small screens, and has a breadth of experience including feature films, fashion films, documentaries, music videos and commercial work.
Velinda will represent the short film, After the Smoke, and talk about her beautiful work.  This is outstanding film was nominated for a Crystal Bear at the Berlin International Film Festival.  It is set in a remote mining town as they gather for the annual rodeo.
We will also be hosting Producer, Director and Designer, Ruby Challenger.  Ruby will represent her film which is based on part of her grandmother’s autobiography.  Her film has screened around the world and won a number of awards including Audience Choice at last year’s St Kilda Film Festival.
Sherbert Rozencrantz, You’re Beautiful, is a charming film about the importance of friendship and finding the place that you belong.  It has screened at over 50 festivals around the world and won 5 awards.
West Australian film, Partners, is by Cath Trimboli, who has been field producer for numerous seasons of Who Do You think You Are? on television.  All the supporting actors are locals from Karratha, where the film was shot.  Partners won best comedy at the St Kilda Film Festival in Melbourne.

Experience a film-lover’s delight, in the bustling country market town of Scone, in the glorious surrounds of the Upper Hunter Valley.  Visit for the day, or stay the weekend and enjoy world renowned thoroughbred studs, vineyards, Lake Glenbawn, and the Tasmanian Devil’s Ark.

What a great event! The line up of short films was diverse and really difficult to pick the winner. Each of the films had a twist within or at the end that was unexpected. Our guests enjoyed great company, wine and food. There was a real sense of community.

We greatly enjoyed the 10th annual SSFF. The committee and festival guests were welcoming and enthusiastic and the selection of short films was diverse and exciting. It was an honour to have ‘Passengers’ screened for audiences in Scone, and it was a pleasure to be able to chat about some of the ‘behind the scenes’ stories. We had a wonderful night with great wine, food and company – Thanks for having us!

Jordan Bond, writer of “Big City” and writer & director of ‘the music video “Every man knows his plague and you are mine” sent a video to the audience and told some interesting stories about the making of  “Big City”. 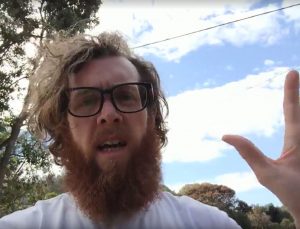 Interestingly the Sunday crowd voted for the same film.

All the photos have been uploaded to our Facebook page